Work on the Erie Canal ceremoniously began in 1817. The Canal opened in 1825, and at that time was considered one of the greatest engineering feats of the era. The canal was important in that it connected the Atlantic Ocean with the Great Lakes. Even though we have developed better methods for transporting goods and people, the canal (albeit with many modifications) is still used for some commercial, but mostly leisure transport. While the glory years of the canal have passed, it is easy to relive its rich history on a bike tour with Classic Adventures. Since this tour is literally in our backyard, we invite you to join us for a drink on our porch to celebrate!

One 19th century old-timer reminiscing about his early days traveling the Erie Canal noted, They ain't no races like they was in the old passenger packet days boats would skim from Albany to Buffalo in less than six days. That was goin' it some, eh? While that was goin' it some back in the 19th century, our trip will cover a good portion of the Erie Canal at a very leisurely pace, and for good reasons.

This is one of our easiest and flattest rides. Highlights include historic canal villages, wonderful educational attractions, including The Morgan Manning House, a flat terrain, and moderate daily distances, with much of the riding on safe canal paths separate from road traffic. Classic Adventures enjoys the distinction of being the first tour operator to offer full service bicycling departures along the Erie Canal. With the Erie Canal in our back yard, experience really does count. Join us, we think you will agree.

Ride from historic Lockport following the old Erie Canal. The ride will take us through several noted canal towns, including Medina, Albion, and Holley, New York. Be sure to visit the Medina Railroad Museum. The town of Albion boasts the highest concentration of cobblestone houses in the U.S. Arrive in time to peruse the shops of historic Brockport, a town that is nearly 200 years old. The route is essentially flat. Lodging: Hilton Hampton Inn and Suites. (18, 34, or 43 miles)

Follow one of the nicest stretches of the Erie Canal, stopping along the way in Adams Basin and Spencerport, two pleasant canal towns that owe their existence to the commerce created by the Erie Canal. Do not miss out on the ice-cream from the Pittsford Farm Dairy located near the hotel or take an afternoon boat ride on the canal (optional). Lodging: The four-star Renaissance Del Monte Lodge & Spa. (28 or 35 or 42 miles)

Ride to Palmyra, NY or Newark, NY, home to the Joseph Smith Farm along original canal path and then loop back to your hotel. Sumptuous farewell dinner at the acclaimed Erie Grill. Lodging: Renaissance Del Monte Lodge & Spa. (16, 36, or 44 miles) 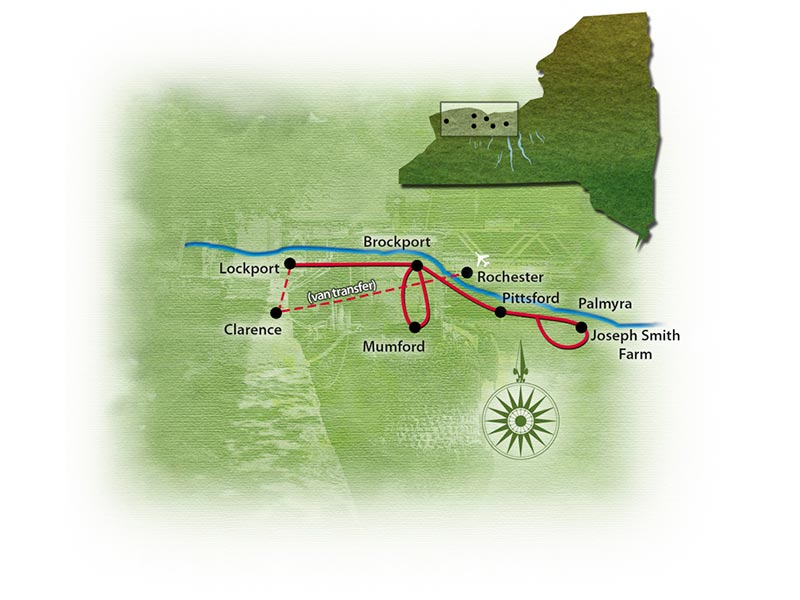 (for solo travellers who want to guarantee a single room.)

This is one of our easiest and flattest rides. Distance options available each day. Some ebikes avail.