The Cotswolds is region typified by gentle hills and honey-colored stone villages. Just 100 miles west of London, it is an area that boasts some of the best walking in England. With outstanding beauty, the footpaths are exceptionally well maintained, while the nature of the landscape means that the walking is within the capabilities of almost everyone.

Our walk will take us from the ancient Roman City of Bath, through some of England's most beautiful villages including Painswick, Burford, Upper and Lower Slaughter and Broadway, often referred to as the "Jewel Of The Cotswolds". Part of our itinerary will take us along the Cotswolds Way, a 102-mile route that takes in some of the Cotswolds best scenery with sweeping views, historic monuments and ancient pubs along medieval tracks. As a special treat we will visit the town of Bampton, home to the fictitious town of Downton in the award winning PBS series Downton Abbey.

We'll experience just three different hotels over seven nights. (You won't have to pack and unpack each day.) Accommodations will include two nights in the heart of Bath, 2 nights at the Lamb Inn in Burford a quintessential English country hotel and 3 nights at the Broadway Hotel in Broadway. Used as a retreat by The Abbots of Pershore 600 years ago. It has a feeling of tranquility still enjoyed by today's visitors. We hope you will join guides Peter and Maria Martin for what will be a memorable adventure.

Arrive in Bath. Gather for a private guided walking tour to visit some of the finest architectural sights in Europe, such as the Roman Baths and the famous Royal Crescent.

A 9-mile walk along the banks of the Kennet and Avon Canal, one of the most picturesque canals in the country.

After a short drive we begin our 8-mile walk along the Cotswolds Way through an area of ancient woodland into the 13th C. village of Painswick, the Queen Of The Cotswolds. Plenty of time to explore the village.

An easy 7-mile walk past rolling sheep pastures and trout streams to the villages of Bibury and Coln St. Aldwyns. After lunch a short drive to the Roman Villa at Chedworth.

This morning a delightful 6-mile loop walk along the River Windrush, through the towns of Fulbrook and Widford. After lunch a short drive to the villages of Stanway and Stanton, reputedly the most photographed villages in the Cotswolds. An option of a beautiful 5-mile walk into the town of Broadway where we will check in for the last 3 nights.

Broadway is one of the most beautiful villages in England. Today's walk joins two of the Cotswolds most famous villages, Upper and Lower Slaughter, home to many stone cottages with beautifully tended gardens. A hearty 7.5-mile walk along the Eye stream and River Windrush.

Leaving our hotel we walk through the village of Broadway to the 14th C. village of Chippng Campden with its market hall and beautiful High Street and the official end to the Cotswolds Way.

After breakfast, we will transfer to the Evesham train station for morning connections back to London. 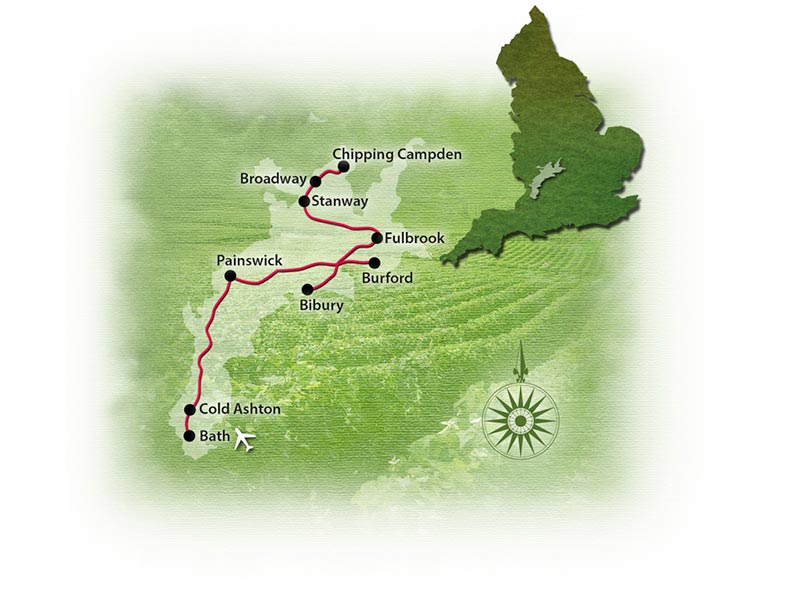 (for solo travellers who want to guarantee a single room.)

Easy to moderate walking. Daily distances between 5 and 10 miles.